We left from Portland on the Bolt bus at 6 in the morning and arrived at the bus station in Vancouver at 2 in the afternoon. We soon discovered that we needed to get on the Skytrain in order to get to our host’s house. Our backpacks were heavy and it proved to be a challenge to keep our balance on the lighting fast train as we zipped over the top of the city. I almost took out an old lady with my massive backpack.

We got off at our stop and started down the street given to us in our directions from our couchsurfing host. The walk was only supposed to be about fifteen minutes, but with all our luggage it took us about twice as long. Finally we reached The Batcave. It was immediately apparent that we were at the right house. As it was covered in couchsurfing stickers on the outside of the door.

There was a communal fridge filled with various things out of the nearby Walmart dumpster. The living room had three couches and a coffee table, however the first thing you’d notice was the strips of jean cuffs hanging from the ceiling like stalactites to create a cavelike feel.

Our host, felix, read us the house rules: Contribute to the fridge if you eat out of it, couches were first come first serve, don’t steal anything, and be nice. There are about eight people living in the house from all over the world. Most of them discovered The Batcave through couchsurfing and then moved in after awhile. They were so welcoming and we had a great time hanging out with them and hearing about all the different places they were from! 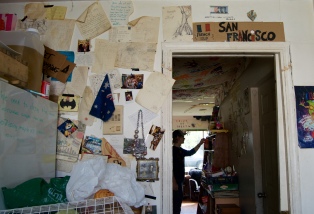 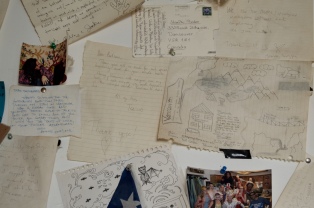 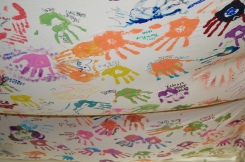 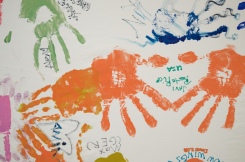 We stayed up late talking and finally slept on their futon in the living room. It was a great place to stay and we’re so thankful that we found them on Couchsurfing. If we’re ever in Vancouver again we would love to stay at The Batcave!

2 thoughts on “The Batcave”